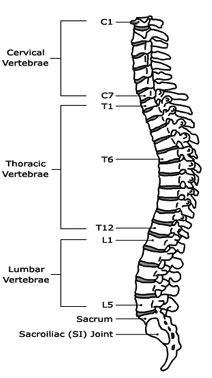 The spine has a three main curves (cervical, thoracic, lumbar) when viewed from the side. These curves help to better absorb the loads applied to the spine from the weight of the body and allow for an upright gait. The cervical spine (neck) and lumbar spine have a normal inward curvature that is referred to as lordosis. The thoracic spine has a normal outward curvature that is referred to as kyphosis.

There are three main types of kyphosis: postural, Scheuermann's, and congenital. The great majority of cases of kyphosis do not require any treatment. Physical therapy and exercise are often effective in postural and Scheuermann's kyphosis. Surgery is recommended for congenital kyphosis and more severe cases of Scheuermann's kyphosis.
Schuermann first described a rigid kyphosis of the thoracic or thoracolumbar spine occurring in adolescence in the 1920s. The diagnosis of Scheuermann's kyphosis was based on the radiological criteria reported by Sorensen (at least three consecutive vertebral bodies with a minimum of 5° of wedging) with additional findings (irregularities of the vertebral endplates, disc material herniation through the endplates (Schmorl’s nodes), narrowing of the disc spaces, and lengthening of the vertebral bodies).