To communicate with your back doctor, it helps to know the terms your physician might use to explain and describe your condition. Just as dentists use a number to identify each tooth, a spine doctor has a labeling system for each link on the chain that makes up the spinal column. To clear things up a bit, here is a "crash course" in spinal anatomy. Click on the Topics below to learn more.

When viewed from the side, a healthy spinal column is slightly S-shaped. The top seven vertebrae are known as the cervical vertebrae, labeled C1 through C7.

The chest area contains the thoracic vertebrae, T-1 through T-12. The thoracic vertebrae do not rotate as much as the neck and low back. Consequently, this area of the spine is more stable and is generally less susceptible to injury. Relatively few back pain cases involve the T-level vertebrae.

Below the lumbar spine area is a series of fused bones known as the sacrum. At the bottom tip of the spinal column structure is the coccyx or the tailbone.

Each rounded vertebra body has pedicles and laminae, facet joints, and the bony transverse and spinous processes, which are the narrow, finger-like spikes pointing out from the sides and back of the vertebra.

This spinal column is held in place by surrounding muscles, ligaments and tendons that act as supporting guy wires. When working properly, the spine is able to bend and twist. When muscles and ligaments weaken, problems arise in the stability of the spine. Muscles and ligaments can strain, and discs and facet joints can be injured. 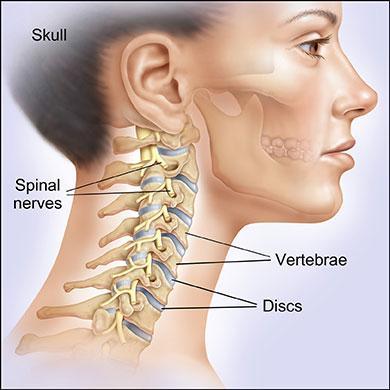 The thoracic vertebrae make up the middle segment of the vertebral column making the thorax with ribs attached at each level protecting the heart, lungs and other organs. The vertebra in the thoracic region are labeled T1 through T12.

The lumbar area, or low back, contains L-1 through L-5, the largest, most sturdy group of vertebrae. Because it bears most of the body's weight when we sit, stand, push, pull, lift, and move, the lumbar section is considered the most injury-prone area of the spine. The spinal cord threads from the brain down through the spine and ends at about L-2, where it forms a bundle of nerves known as the cauda equina (Latin for 'horse's tail'). From the neck area to the coccyx are 31 pairs of nerve roots that exit the spinal canal and head for remote areas of the body through vertebral portals called foramina. At the base of L-5 is a solid mass of five fused bones called the sacrum (pronounced 'say-crum'). Finally, the spinal column ends at the coccyx (pronounced 'cock-six'), or tailbone, which is actually several small bones fused together.

Within this column of vertebrae is the spinal cord, which travels from the brain stem down through the back. The spinal cord acts as our main electrical wiring system and is protected by the bony vertebrae. At every vertebrae level, there are nerve roots that branch off the spinal cord. When a disc herniates, it can crimp or pressure these nerve roots, which can cause excruciating pain that radiates into an arm or leg.

The spinal disc is like a jelly doughnut. The "jelly" of the doughnut represents the "disc nucleus," and the material that encases the "jelly" is called the "disc annulus." The disc acts likes a rubber shock absorber between the vertebrae. The facet joints act as hinges that allow for twisting and turning of the spinal column. The spinal cord threads through from top to bottom like a telephone wire system.

A bone spur, or osteophyte, is a projection of bone that develops and grows along the edge of joints. Bone spurs are fairly common in people over the age of 60. It is not the bone spur itself that is the real problem; pain and inflammation begin to occur when the bone spur rubs against nerves and bones.

Spondylolysis relates to instability of specific bones in the low back. It a very common cause of back pain, particularly in adolescents. Gymnasts who perform routines that bend and arch the back are often victims of spondylolysis or spondylolisthesis.

Stenosis is a condition that can develop as a person ages, particularly in those over 50. It is characterized by a narrowing of the spinal canal, which places pressure on the spinal cord and nerves, because there is not enough room for them. It resembles placing a ring on your finger. If the finger becomes injured or inflamed, the ring constricts and causes pain. The pain caused by stenosis is typically focused in the low back area and can shoot down the legs and flare up after walking or exercising.

Scoliosis is a disease characterized by an abnormal curvature to the spine, in which the vertebrae twist like a bent corkscrew. In less severe cases, scoliosis may cause the bones to twist slightly, making the hips or ribs appear uneven. When this occurs, the problem is more cosmetic and less of a health risk.

Scoliosis does present a health risk if bones are so severely twisted that they compress vital organs, or if the spinal deformity is so severe that spine health and posture is threatened. If this happens, surgery may be necessary. If left untreated, severe cases of scoliosis can shorten a person's life span.

The spine is composed of many vertebrae stacked on top of each other. Between these bones are discs, which act as shock absorbers. The shock-absorbing discs resemble jelly donuts, each having a jelly-like center. As we age, the discs naturally become less flexible and more brittle. Normal disc degeneration which naturally occurs with old age, can also cause pain.Discs can herniate in any direction--forward, centrally or, most commonly, backward and sideways in the direction of the spinal nerves.

Herniated discs account for a small percentage of back pain.

While herniated discs are often referred to as “slipped discs,” this really isn’t accurate because discs don’t ever slip out of position. They are actually attached by connective tissue to vertebrae above and below. A disc herniation can be “contained” or “uncontained.” With a bulge, for example, the jelly center remains within the disc wall. "Uncontained" means the jelly center has broken through the annulus wall but stays connected to the nucleus pulposus. Or the herniation can be “sequestered,” when it breaks free from the nucleus and travels away from the disc.

A bulging disc forms when the wall of the disc is deformed but not necessarily herniated. The nucleus is still contained in the wall. You NEVER need surgery to treat a bulging disc.

Kyphosis and lordosis are types of spinal deformities. While slight curvature of the spine is normal and healthy, there are some cases where it is over-pronounced and can cause both cosmetic deformity and health risks. When the spine curves inward too much in the low back, it is called lordosis. When the spine in the shoulder blade or mid-spine area has too much forward curve, or too much of a hump, it is called kyphosis. Kyphosis most often occurs in the thoracic area of the spine.

Spinal cord tumors are abnormal growths of tissue found inside the bony spinal column, which is one of the primary components of the central nervous system (CNS). Benign tumors are noncancerous, and malignant tumors are cancerous. The CNS is housed within rigid, bony quarters (i.e., the skull and spinal column), so any abnormal growth, whether benign or malignant, can place pressure on sensitive tissues and impair function. Tumors that originate in the brain or spinal cord are called primary tumors.

Degenerative disc disease commonly occurs with age, as discs become more brittle, less resilient and more prone to herniation. Degenerative disc disease is the single most common diagnosis related to serious back and neck pain. When a disc herniates in the spine, the surgeon can sometimes simply remove a portion of the disc. In other cases, where the disc is more damaged and must be removed, something must be placed into the disc space. Otherwise, the two vertebrae will collapse on top of one another, placing pressure on the nerve roots that branch off from the spinal cord.